Cookie preferences
This website uses cookies, which are necessary for the technical operation of the website and are always set. Other cookies, which increase the comfort when using this website, are used for direct advertising or to facilitate interaction with other websites and social networks, are only set with your consent.
Configuration
Technically required
These cookies are necessary for the basic functions of the shop.
"Allow all cookies" cookie
"Decline all cookies" cookie
Amazon Pay
CSRF token
Cookie preferences
Currency change
Customer recognition
Customer-specific caching
Individual prices
PayPal payments
Selected shop
Session
Comfort functions
These cookies are used to make the shopping experience even more appealing, for example for the recognition of the visitor.
Note
Subshop
Statistics & Tracking
Affiliate program
Facebook Pixel
Google Analytics
Track device being used
Categories
Information 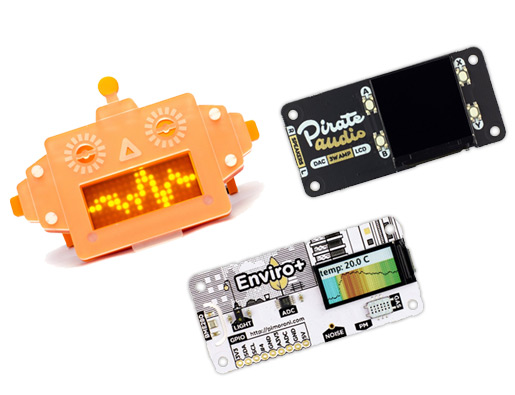 Pimoroni stands for the terms pirate, monkey, robot and ninja. Anyone who sees the products of the British company understands this origin of the name immediately. The self-developed products cover accessories for the Raspberry Pi and the Pi Zeros. Clever solutions for hobbyists and makers that we as BerryBase carry for our customers.

Optimize your Raspberry Pi - with Pimoroni

Pimoni is the expert when it comes to equipping your Raspberry Pi with high-quality add-on modules. The successful company was founded in 2012 in Sheffield, England, and now also has a branch in Essen, Germany. According to the University of Sheffield, Pimoroni is even considered one of the fastest growing manufacturing companies in the UK.

The electronics specialist has the right solution for almost every need around the Raspberry Pi. The product range also includes the Pimoroni Fan Shim, a powerful 30mm CPU fan for the Raspberry Pi, which is one of the top sellers from Pimoroni. The Fan Shim manages a powerful 4,200 RPM and delivers significant added value by optimizing the thermal performance of your Raspberry Pi. Compatibility exists with the Raspberry Pi 4, but also with the 3 B+ and 3 A+ models.

The fan is equipped with RGB LED and a tactile switch, making it wonderfully controllable. The LED serves as an indicator to track the fan status and CPU load/temperature. The tactile switch is also handy: With the help of the included Python library and a daemon, you can program it to switch between temperature-controlled automatic mode and manual mode. Thanks to its "friction-fit" header, the Pimoroni Fan Shim can easily be plugged onto the pins of your mini computer and is ready to go without soldering. In general, the installation is uncomplicated and should not take more than two minutes. While the fan is doing its job, the noise level is very low: The maximum value is only 18.6 dB.

Apart from the Pimoroni Fan Shim, many other top products from Pimoroni are available at Berrybase. The Pibow Coupé 4 is recommended for all owners of a Raspberry Pi 4: The compact case reliably protects your mini computer from external influences like dust or shocks. All ports remain open and thus accessible. The high-quality processed and easy to mount frame for the official 7" Raspberry Pi touchscreen display also fulfills its protective function perfectly. With the Pirate Audio HAT you get a first-class 3W stereo amplifier for your mini computer: Use the module in combination with your Raspberry Pi and your speakers to control the playback of your favorite music and to create powerful sound.

Depending on what you have in mind, you can also use other modules from Pimoroni, such as LED sensors, camera modules or the Pico HAT Hacker.